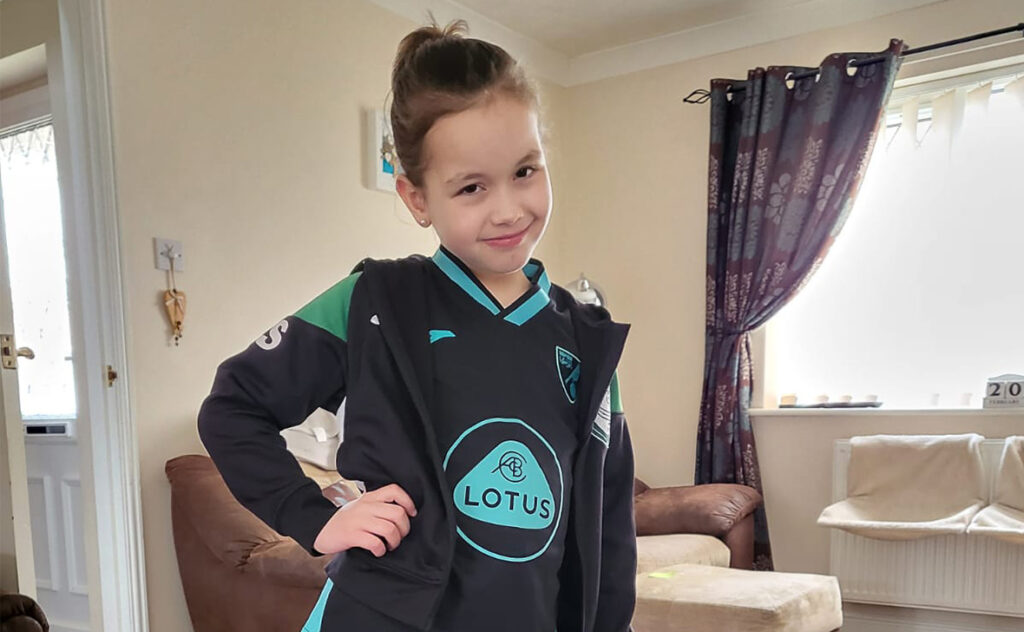 Our May Community Hero, in partnership with Norwich City Football Club, is Amber Sheehy – the Canaries’ 2021-22 Michelle Dack Fan of the Season.

In a public vote against other listed nominees Amber, eight, received thousands of nominations for the club’s fan of the season award, and will be presented with her trophy and signed shirt during a visit to the Lotus Training Centre later this month.

When Amber was five, she was diagnosed with a cancerous brain tumour. Since then, she has had surgery, radiotherapy and chemotherapy to rid her body of cancer.

Since her successful treatment, she is now living life to the fullest and has become a big Norwich City fan, attending both the Liverpool and Bournemouth games this season.

Amber, speaking about winning the FOTS award, said: “I’d really like to say thank you to all of the people who voted for me.

“I’m quite shocked to win but very excited! I love football and I love Norwich City, so this means a lot to me.”

The Community Hero and Fan of the Season recently met some of the first team players and has taken inspiration from some of her favourite players Tim Krul and Angus Gunn. She wants to play in goal as she hopes to join her first under-9s’ girls team next season.

Amber’s mum, Amanda, expressed her pride over her daughter’s resilience in life and said: “Amber is the bravest and strongest person I know. She is absolutely fearless and has faced challenges no little girl should ever have to.

“People learn a lot from Amber on a daily basis, including her friends and family who started #AmbersArmy. They know what this will mean to her and to have her name on a trophy at Norwich City is just wonderful.”

Amber will be attending Norwich City’s fixture against West Ham on Sunday, May 8.

This article was produced on the 5th May 2022 for information purposes only and should not be construed or relied upon as specific legal advice.